This article by Jason Busch originally appeared in the November 2018 issue of InBusiness Magazine and can be found online here.

Through 35 years, two companies, and a leadership transition to a second generation, Bill and Nancy Pharo have built Pharo Heating & Cooling and Pharo Marine by treating everyone like family.

Ask anyone who was in the workforce in 1982, and they’ll likely agree that it wasn’t the ideal time to start a business. Nationwide, Americans were facing one of the deepest recessions in history, skyrocketing mortgage rates, and high unemployment. Market conditions were bleak, but for Bill and Nancy Pharo, starting a business at a challenging time only further galvanized their work ethic and family values. It also helped lay a strong foundation for the ups and downs that were to come as a part of a 35-year journey, growing Pharo Heating and Cooling into the household name in HVAC, that it is today.

1983 wasn’t Bill’s first experience in the HVAC business. He got his start years earlier working with his grandfather, father, and two uncles in his grandfather’s business, Pharo Plumbing and Heating. When that business dissolved in 1975, Bill found other work. It was after meeting Nancy and getting engaged in 1982 that Bill got serious about the prospect of starting his own business. Despite a disadvantageous market at the time, Bill wanted to build something for his family’s future: “Interest rates were 15%-16%, nobody had money, it was a crazy time. I decided to throw my hat in the ring and started bidding on jobs.”

The first bid took place in November 1982, with a small job landing in December. The first big job came in February 1983, for Don Simon Homes (now Veridian Homes). “That job with Don Simon gave us the stability we needed to officially get started as a business.” Bill focused on doing what he did best, “I had the mechanical aptitude, and focused on getting jobs done right. I was pretty good at everything but the paperwork, and that’s where Nancy came in with her great organizational skills.”

Nancy was working as a speech pathologist, but as the business quickly grew in that first year, she became involved in managing the business, and helping wherever was needed:“I remember late in the summer of 1983, I was a few months pregnant with our first son Clint, feeling sick as can be, and there I was holding up ductwork for condos that were being built in DeForest,” Nancy laughs. “At the time, we weren’t thinking about what this business might grow into. Bill and I just did what needed to be done.”

Work continued to pick up, and when February 1984 rolled around, Bill and Nancy reached a milestone achieving a year as business owners, as well as becoming parents to son, Clint. From 1984 to 1985, When their second son, Andrew, was born in 1985, and with the growth of the business, they made the decision for Nancy to join the business full-time in August of that year. 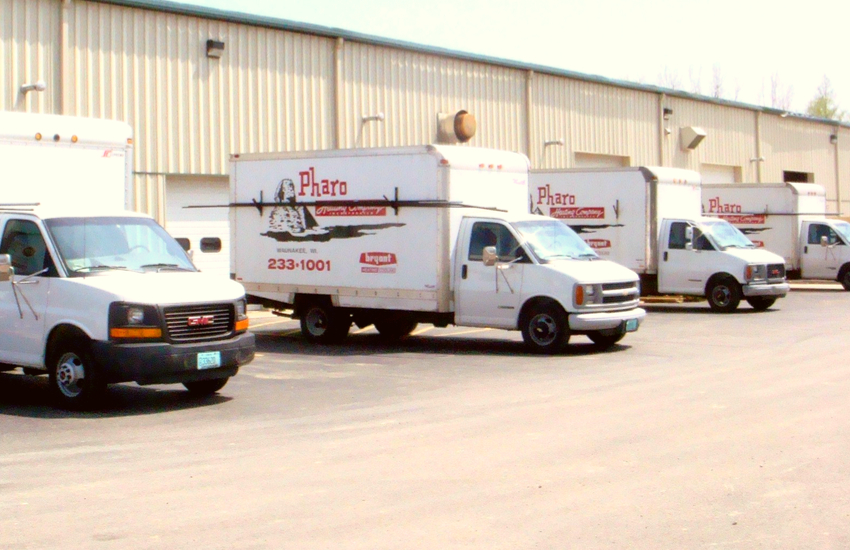 Building a Culture of Family at Pharo

Family is the culture at Pharo Heating and Cooling. In talking with team-members, it’s apparent what it means to be family extends to every staff member. 23-year veteran of the company, Ryan Olson, shares, “When I first started with Pharo, I told them I could come on board for a few weeks to help them out, and before I knew it, a few weeks turned into 23 years! There’s so much camaraderie with everyone. We really have fun together. Bill and Nancy throw parties for the staff and we have cookouts. When it’s someone’s birthday, Nancy makes them a birthday cake and we celebrate. Nancy has never missed a person’s birthday. That says a lot about the kind of people they are.” The respect is mutual among all staff at Pharo. Bill says, “The credit really goes to the employees, and the longevity of so many of our staff. Our employees are great. They work hard, and we strive to treat our staff as equals.”

Over the years, the business has steadily grown. Though the Pharos made their first hire in 1985, they’re still bringing new team members aboard. “Hiring your first employee is probably the scariest thing you’ll ever do as a business owner,” says Bill. “I remember looking back when we had eight employees and thinking wow, this is as big as we’ll ever be! And today, here we are with 22 employees, and many of them have been with us for more than 15 years!”Family also includes, sons, Clint and Andy, who grew up in the family businesses: Pharo Heating and Cooling and Pharo Marine, which opened its doors in 1989. Clint and Andy grew up with many of the employees, like Dennis Schutz who has spent his entire career with the company and is still with Pharo today: “I’ve been with the company nearly 30 years. I remember times when projects maybe took us four days, and now that project could be done in a day and a half. Over time, we’ve gotten better equipment, and better as a team.”It was important for Nancy and Bill to spend time with their kids, and they supported staff in doing the same. 20-year employee Ken Ransom shares, “I never had issues getting to my son’s ball games growing up. We worked hard, but they (Bill/Nancy) always supported us. One time my son’s team made it to a national tournament, and on short notice, they were accommodating so I could be there for his games.”

In addition to family values, and respecting employees, Bill and Nancy have a strong value for doing high quality work, and doing the right thing. The company has grown through word of mouth and repeat business. “I can’t ever remember a time where we said we’d be there, and not shown up,” says Bill. The Pharos strive for accurate scheduling, and have never held up a closing because they weren’t done when they said they’d be. That has sometimes meant working late, even on a weekend. “If that’s what it takes to get it done on the timeline we promised, that’s what we do.” Employees have taken notice of the Pharos’ work ethic and business savvy as well. For example, Ken shares, “It’s not all about giving to the employees; they are smart business people. They know how to balance running it like a family, and treating everyone fairly, while building a successful business. I respect that about them.”

Innovation a Key to Success

Through the years, Pharo Heating has stayed innovative in order to remain viable even during challenging times. One of those innovations included the purchase of a CNC plasma table in 1999 for creating custom ductwork; this investment greatly increased sheet metal production. The economic downturn from 2007-2011 brought challenges for the Pharos, as it did for many businesses. At the time, Pharo had contract work with an area builder, who had to downsize to one contractor. Bill shares, “Thankfully, they chose us. If we wouldn’t have gotten that work, we would have had to let more people go. Experiences like that force you to constantly be looking back and make sure you’re always doing a great job, and being innovative.”

During that time, the Pharo’s pursued State Weatherization Contracts, which was entirely new for them, and became a contributing factor that helped keep steady work for techs. Another key to success during this time was continued advertising. When other HVAC companies pulled back on advertising, Pharo increased marketing efforts to gain market share. Bill says that while those years were difficult, they were also the most satisfying because it forced the company to evolve and grow into new lines of work. The Pharos did what they could to retain as many of their employees as possible, and it proved that even in challenging times, they could succeed and survive. 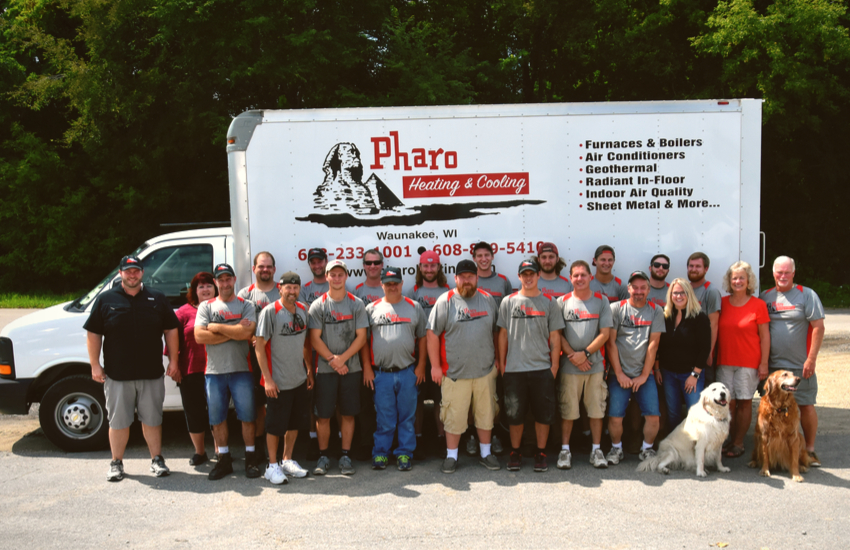 Looking to the Future

Nancy and Bill reiterate that they’ve always supported their sons in pursuing whatever path they wanted to pursue. Nancy shares, “We never pushed them to join the business. It was always their decision, and they both just came back, and it makes me proud that they chose to.” Andy enjoyed the boat side of the business, and it was a natural fit when he joined Pharo Marine in 2010. Clint chose to join the family business during his undergraduate years at UW-Oshkosh. Graduating in 2007 wasn’t an ideal time for anyone in business, but he knew it was what he wanted. “A lot of my friends couldn’t find a good job coming out of college,” Clint explained. “By then I had my mind made up to go into the family business, regardless of how difficult it was going to be.”

Today, Clint works as the Operations Manager for Pharo Heating and Cooling, running the day-to-day operations, meeting with customers to develop estimates, while Bill is phasing out a bit more each day, enjoying more time on the golf course and with his three grandsons. Most days, you’ll find Nancy in the office, managing the books, and ensuring that no birthday goes missed “I love what I do,” she said, “and I need my people, so I plan to be here for a long time to come. Plus, it’s really fun to watch my sons as they grow in leadership every day.”

And there are opportunities for new people to come on board with Pharo Heating and Cooling. With the longevity of many staff members, the collective knowledge, and supportive environment, new employees are supported in their learning and growth. The team at Pharo is happy to provide on-the-job training. “The trades are a great alternative for someone who wants to work with their hands and enjoys seeing a project completed from beginning to end.  If someone is mechanically inclined, we can train them,” said Nancy.

Under Clint’s leadership, the company continues growing at a steady pace, and will carry on the values for family, staff, and quality of work. “We have a great group of individuals that work here, and I appreciate all of their hard work. I want to continue to provide a place of employment that they can be proud to be a part of. A lot of these guys are the ones that trained me as I was growing up, so making sure they are taken care of is a top priority of mine,” said Clint. Bill has all the confidence in his sons as they carry on the family name. “They came into these businesses in the worst of the economy, and they’ve worked to grow each business,” he said. “They’ve gone through the worst of the worst, and my hope is that the values stick with them for a long time, through the ups and downs.” When asked what they want to be remembered for, Nancy says, “That we were honest, we did the work right, and that we treated our customers, and staff well.”

Pharo Heating & Cooling is a full-service HVAC contractor in Madison. Our team provides top quality service for new construction and replacement furnace and air conditioner needs. For more information about annual furnace inspection or concerns, give us a call at 608-849-5410 or submit a contact form through our website.