Believe it or not, there are many homes in the city that still rely on heating oil to heat their homes.  The age of these homes can date as early as 1900 all the way to the 1970’s.  We find that the majority of these homeowners are reluctant to change over to gas due to some misnomers they may have heard.  Such as…..“Gas doesn’t burn as hot as oil!”….“It will cost more because you need to burn more gas to equal the output of oil”….”You will always be cold!”.

We recently performed a case study on a 1904 Victorian home located in Portage, WI that was recently converted over to gas.  Let’s take a look at the components and the existing conditions and see how the project ended up. 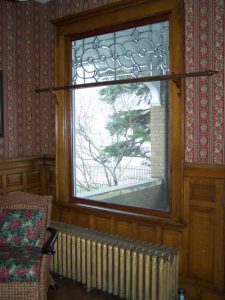 The home is a 6 bedroom 3,300 square foot residence with 10-foot ceilings.  An energy assessment had recently been performed and many of the air leaks were sealed up prior to the previous boiler install.  Insulation had been installed in the attic to an R-Value of 20.  The walls were recently filled with dense-packed insulation.  An exterior air barrier was recently installed under the new siding. In the heart of the cold snap during the 2013-2014 winter the homeowners mentioned, they were burning an average of 100 gallons of oil a week to keep the home at a temperature of 64 degrees.  They also ran supplemental electric space heaters in several rooms.  Now we didn’t want to pry, but we did the math on the oil pricing during that time and heating oil was fluctuating at 3.79 per gallon for that year.  Yes, they were spending $1,500 per month on heating oil, not to mention the increased electric bill from all the space heaters. 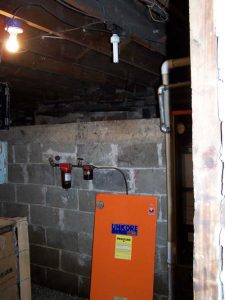 The home had a 3,000 gallon (yes that is not a typo) oil tank located in the basement.  The dimensions were 5.5’ tall and 18 feet long.  This was made from ¼” cold rolled steel welded in place and it was partially buried into the sand floor.  Oil smell was strong indicating maybe a leak or a spill.  Encased around the tank was a 12” concrete sarcophagus.

The existing oil boiler was a 10-year old 115,000 BTU boiler with an out-of-the-box efficiency of 85%. Upon inspection of the old boiler, we had noticed that the fingers on the heat exchanger had all but corroded off.  This most likely was due to poor oil or a wrong configuration of the oil injectors causing accelerated corrosion.  The poor efficiency of the boiler meant that it would take several hours to heat the water to even increase the temperature in the home 1 degree. 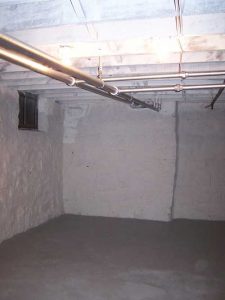 The boiler fed 15 large radiators through a spaghetti maze of pipes.  The piping was originally steam and converted in the 60’s over to water.  With a steam piping system, the main supply consisted of large feeder pipes which in turn fed to the smaller radiator pipes, which were all pitched back to the boiler to recover the condensation.  Pipe sizes ranged from 5” to 1 ¼” in diameter and they were all made of cast iron.

By draining the water from the system we had estimated it contained 300 gallons of water that needed to be circulated and heated first in order for the radiators to start producing heat. The poor efficiency of the boiler in combination with the large volume of water meant that it would take several hours to raise the inside temperature 1 degree.

Our solution for the homeowners included: 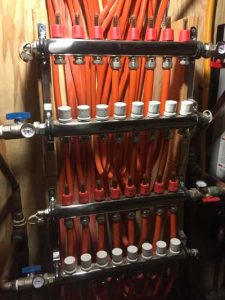 The new high-efficiency gas boiler created a near-instant heat coming from the radiators.  The manifolds were adjusted so that more heat could be diverted to the rooms that needed it more, and we had the ability to shut off rooms that were not needed.  The PEX tubing allowed us to install the supply lines in the floor joists creating more head room in the basement.  Eliminating the spaghetti maze of pipes and eliminating radiators, reduced the water amount by about 100 gallons.

The exhaust of the new boiler is sent out the side of the home.  This allowed us to close up the hole in the chimney making the house even tighter and lessening the chance of back-drafting poisonous monoxide gas.

The cost for the natural gas during the winter months’ averages at $175 per month.  Compare that to the previous oil bill of $1,500. When looking back at actual gas and oil bills and being respectful of heating degree days, the cost savings become even more dramatic.

The homeowners told us they no longer can hear the furnace kicking on, which used to produce a howl and rumble of the floor and walls. They are not afraid of turning up the heat now and they keep the inside of the home right around 72 degrees during the day in the winter.

If you would like information regarding radiant heating solutions for your older home do not hesitate to contact us.